Former Vice President Mike Pence was briefly heckled Friday as a "traitor" at a conservative conference in Orlando seen as a stop for Republicans honing stump speeches for a possible presidential run in 2024.

As Pence kicked off his remarks to the Faith and Freedom Coalition, the organization founded by political consultant and lobbyist Ralph Reed, several audience members greeted him with boos. 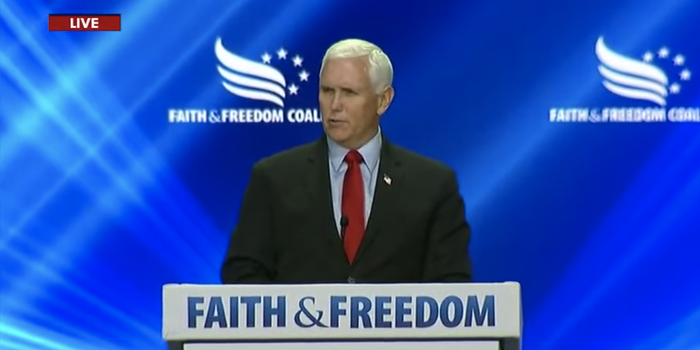 "It is great to be back with so many patriots," Pence said as the jeering continued, "dedicated to faith and freedom and the road to the majority."

As he thanked Reed, who introduced his speech, multiple audience members yelled out, "Traitor!" and continued to try to drown him out. Security personnel quickly removed the hecklers from the crowd, and Pence was able to continue his remarks without further incident.

Pence oversaw the certification, and Trump, speaking at a rally before the riot, urged him to block it.

Later in his speech, Trump again commented on Pence.

"And Mike Pence is going to have to come through for us, and if he doesn't, that will be a, a sad day for our country because you're sworn to uphold the Constitution," Trump said.

As the rioters breached the Capitol that afternoon, Trump again took aim at his vice president. "Mike Pence didn't have the courage to do what should have been done to protect our Country and our Constitution, giving States a chance to certify a corrected set of facts, not the fraudulent or inaccurate ones which they were asked to previously certify," he tweeted. "USA demands the truth!"

With recent moves such as announcing a book deal and returning to the speaking circuit at Republican gatherings, Pence has seemed to signal that he intends to mount a White House run in 2024. If so, that would set up an inevitable clash with Trump supporters, especially if the former president decides to seek a second term.

"You know, President Trump and I have spoken many times since we left office, and I don't know if we'll ever see eye-to-eye on that day," Pence said at a GOP dinner in Manchester, N.H., in early June, referring to Jan. 6.

On Friday, however, Pence continued to walk the fine line of linking himself to Trump's legacy while continuing to occupy a place of scorn among his supporters.

"You know, for the past four years, President Trump taught us what Republicans can accomplish when we stand firm on conservative principles and don't back down," Pence said. "Our administration was four years of consequence, four years of results. As we like to say, it was four years of promises made and promises kept."