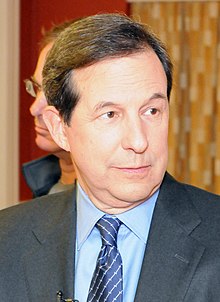 The veteran news anchor, who joined Fox News Channel in 2003, said he wants to "try something new" and "go beyond politics."

After nearly two decades, Fox News anchor Chris Wallace announced Sunday that he is leaving the news network and heading to CNN.

The veteran news anchor, who joined Fox News Channel in 2003, announced his immediate departure from the program “Fox News Sunday” at its conclusion on Sunday, saying he wants “to try something new.”

“Eighteen years ago, the bosses here at Fox promised me they would never interfere with a guest I booked or a question I asked. And they kept that promise. I have been free to report to the best of my ability, to cover the stories I think are important, to hold our country’s leaders to account. It’s been a great ride,” he told viewers.

Wallace is headed to CNN’s upcoming streaming service, CNN+, the network confirmed in a statement. CNN recently had its own anchor shake-up with its firing of prime-time host Chris Cuomo earlier this month.

Wallace, 74, said in a statement that he is “thrilled” about the move and particularly “excited to explore the world of streaming.”

“I look forward to the new freedom and flexibility streaming affords in interviewing major figures across the news landscape — and finding new ways to tell stories,” he said.

Wallace’s time with Fox News has included moderating two general-election presidential debates and interviewing several U.S. presidents and world leaders. Before joining Fox News, he was a senior correspondent with ABC News and prior to that a White House correspondent with NBC News.

“I want to try something new, to go beyond politics to all the things I’m interested in,” Wallace said Sunday. “I’m ready for a new adventure. And I hope you’ll check it out. And so ― for the last time, dear friends ― that’s it for today. Have a great week. And I hope you’ll keep watching ‘Fox News Sunday.’”

A permanent replacement for the anchor has not been found, a spokesperson for Fox News Media said in a statement to HuffPost that praised the work of Wallace’s team over the years.

“We are extremely proud of our journalism and the stellar team that Chris Wallace was a part of for 18 years. The legacy of FOX News Sunday will continue with our star journalists, many of whom will rotate in the position until a permanent host is named,” the statement read.

Wallace ― whose father was Mike Wallace, one of the original correspondents for CBS’s “60 Minutes” and a moderator for NBC’s “Meet the Press” ― had inked a deal in 2017 that would keep him with Fox News past the 2020 election. His contract was reportedly set to expire this year and Wallace did not want to renew it, CNN reported, citing a person with knowledge of the matter.

Reflecting on Wallace’s departure, the president of Media Matters for America, a nonprofit media watchdog that regularly targets Fox News’ coverage, said the anchor gave the network “a thin veneer of respectability; and now, the veneer is gone.”

“Fox executives routinely pointed to Chris Wallace in defending themselves from criticism that the network is a dangerous propaganda channel,” Angelo Carusone said in a statement to HuffPost.

Carusone pointed out that the most praise Wallace gave the network in his farewell speech on Sunday was that it did not interfere with his work, which he said should have been “the norm for any news program at a news network.”

“That Wallace felt like this was the best he could say illuminates the way things are done over there,” he said.

Media Matters similarly called Fox News’ surprise 2019 on-air resignation of chief news anchor Shepard Smith “a disaster” for the network. Smith, like Wallace, had been widely praised as having news credibility amid a network of outspoken conservative news pundits.