All Americans should take some comfort from the revelations of the scheme by top officials across the Obama administration to subvert the 2016 election. It has a very important silver lining. Donald Trump’s improbable election turned a klieg light on the termite-infested foundation of our Republic. Some of those vermin are mighty big.

The exposure of the Clinton Campaign/Fusion GPS/John Brennan/James Comey/DOJ/FBI/State Department cabal to undermine the will of the American people in the 2016 election exposed the vast corruption at the highest levels of our kleptocratic establishmentarian government.

In fact, I think a conservative case could be made that the most important result of Donald Trump's 2016 election had nothing to do with Trump at all. It had nothing to do with Mr. Trump’s very important pro-growth tax and regulatory policies, which have supercharged our economy, or with his strengthening our military and setting our international adversaries back on their heels with his projection of American strength. It had nothing to do with him unleashing our military to crush the Islamic State in a matter of months, a blight on the Middle East that the Obama administration had fostered and allowed to fester by pulling American troops from Iraq. It didn’t even involve the phenomenal, and phenomenally large, set of fine conservative jurists that President Trump has placed on the federal bench.

No, the greatest result of the 2016 election was the exposure of corruption so vast and so profound within and across the highest levels of our government that the American people (or those who are thinking anyway) had their breath taken away.

Imagine where our country would be had Hillary Clinton won the 2016 election. Although the exposure of her secret unsecure email server began before the election, you can bet your bottom dollar that all investigations into it would have been shut down immediately on November 9, 2016.

There would have been no Justice Department Inspector General’s report into the FBI whitewash investigation of Hillary’s illegal private email server. DOJ IG Michael Horowitz would have remained a relatively obscure government figure looking into abuses of G-cars by federal agents, or maybe sick leave abuse by DOJ employees. All Hillary and her cronies' trafficking of highly classified government information and wheeling and dealing on behalf of the corrupt Clinton Foundation would have been brushed under the proverbial rug. In fact, her Foundation would probably be flourishing right now, with dump truck loads of dollars from foreign officials lining up to buy favors from Uncle Sam.

And that whole phony, Russia-Trump “collusion” counterintelligence investigation launched against Donald Trump and his campaign? At best, it would have continued along quietly and then, just as quietly, fizzled out, having done its job of casting an ominous cloud over the Republican candidate, and having ensured Mr. Trump’s loss. Perhaps the FBI would have issued a quiet press release, probably around June 2017, saying that it found no basis for charging Mr. Trump or any of his campaign officials with colluding, conspiring, whatever, with Russians. Or perhaps, being a counterintelligence investigation, which traditionally have never been given any publicity by the Justice Department, it would have just died a completely silent death.

I marvel every day at how it was that America dodged this Clintonian bullet. The reckoning that Attorney General Barr and his top prosecutor, John Durham, are undertaking to examine this whole saga could not be more timely for the health and continuing viability of America as a functioning Republic, nor more profound. By all rights, it should usher in enormous changes in our government. Those changes should include the restructuring of the FBI, the FISA court system, and the Justice Department, to ensure those institutions are never again weaponized for political purposes.

Similarly, it becomes increasingly evident that the State Department, the National Security Agency and the CIA were, to one degree or another, compromised as well. Consideration must be given to putting systems in place to ensure that they too are never again put into the service of one political party against another.

Given the enormous technological powers that the federal government possesses today to spy on Americans – virtually each of whom now carries a device that can be used to track and listen in on them – the timeliness of this whole Barr/Durham exercise could not be more significant. The ability to gather vast quantities of information on all of us and put it to nefarious purposes, particularly if there is an alliance between giant tech companies like Google and Facebook with one political party or the other, poses a direct threat to our freedoms and democratic institutions.

We are already seeing such tech industry-political party collaboration. Consider “Google’s remarkably close relationship with the Obama White House,” in the words of none other than the leftist publication The Intercept, which reported 427 separate visits by Google staffers to the Obama White House between January 2009 and October 2015. Now what on earth could all those visits have been about?

Let’s put aside for the moment the information collection capabilities of these companies, like Google, and how that could be used to advantage a political party.  Consider their ability to influence voters by, in the case of Google, altering its search algorithms to help certain candidates, or in the case of Facebook, by sending out targeted “Go Vote!” messages only to Democratic voters.

Self-described Hillary supporter and non-conservative, psychologist Robert Epstein, former editor-in-chief of Psychology Today, has written extensively and testified before Congress about the dangers of tech companies favoring one candidate over another. (His testimony to Ted Cruz is a must-see.) And he knows whereof he speaks. He conducted an academic study on this issue, published in Proceedings of the National Academy of Sciences about the impact of search engine manipulation on voting. Notwithstanding his liberal leanings, Dr. Epstein believes that almost all of Hillary’s popular vote margin over Donald Trump in 2016 could be attributed to Google influencing undecided voters through search engine manipulation, with that manipulation accounting for 2.6 million of Hillary’s votes.

As Dr. Epstein told PJ Media: “This is not a problem for conservatives. This is a problem for humanity. Who gave a handful of executives in Silicon Valley the right to decide what billions of people around the world can see and cannot see? Who gave them that power?" Dr. Epstein’s research in this area is now the subject of a documentary, “The Creepy Line.” Dr. Epstein emphasized the ability of the tech companies to influence voters is almost invisible to the public. The numerous tools available to tech companies to influence our election may have shifted more than ten million votes to Hillary in 2016, Dr. Epstein asserts.

The corruption that has been exposed, both by those within the government willing to weaponize it for political purposes, and by their alliances with tech companies willing to manipulate us, is a direct threat to our form of government. The exterminators better be on the way, or 2016 may have been our last (at least partially) fair presidential election.

President Trump's campaign has reportedly spent almost $500,000 on Facebook ads in Texas this year, raising questions about whether his team is concerned the normally deep-red state could flip.

The Texas Tribune reported Friday that the Trump campaign spent $481,900 on the social media ads directed at Texans between Jan. 5 and Aug. 3, citing data from Bully Pulpit Interactive, a Democratic firm that monitors digital ad spending.

“When we think about digital ads, we think about it in terms of, ‘Is [Trump] using them to engage and excite his existing supporters, or is he using it to reach out and persuade new supporters?’” Bully Pulpit senior director of research and data Daniel Scarvalone told the Texas Tribune.

The Hill, using Bully Pulpit's interactive tool, found that Trump spent $500,523 on Facebook ads targeting registered voters in Texas between March 24 and Aug. 10. The campaign spent more on Texas ads during that period than it did in Florida, California, Ohio or Pennsylvania.

The Texas Tribune reported, citing Facebook's ad library, that the two ads with the highest percentage of viewers from Texas focused on promoting a wall at the U.S.-Mexico border and calling 2020 Democratic candidates "crazy socialists."

Democratic Party officials told the Tribune that this suggests the Trump campaign might be concerned Texas is becoming a competitive state for 2020.

Trump campaign spokeswoman Kayleigh McEnany said in a statement to The Hill that Republicans have a long record of success in Texas.

“Every election there is the new great Democrat hope for Texas. Ask Governor Wendy Davis and Senator Beto O’Rourke how easy it was," she said, referring to Democrats who lost statewide elections.

"The last Democrat presidential nominee to win Texas was Jimmy Carter in 1976," she added. "We would love for Democrats to make a heavy investment in Texas, particularly in Houston and Dallas. Have at it.” 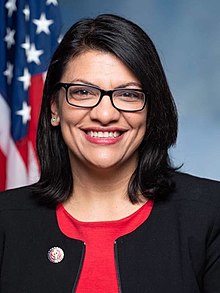 The Democratic congresswoman from Michigan wrote a letter requesting entry to see her elderly grandmother.

Israel has decided to allow Rep. Rashida Tlaib (D-Mich.) to enter the country and visit with her family in the West Bank, Reuters reported Friday.

On Thursday, Israeli officials said Tlaib and Rep. Ilhan Omar (D-Minn.) were barred from entry over their support for the pro-Palestinian Boycott, Divestment and Sanctions movement. The decision drew criticism from the Jewish community and U.S. lawmakers.Tlaib sent a letter to Israeli Interior Minister Aryeh Deri requesting entry so she could visit her grandmother, “who is in her 90s and lives in Beit Ur al-Fouqa,” a CNN reporter tweeted: